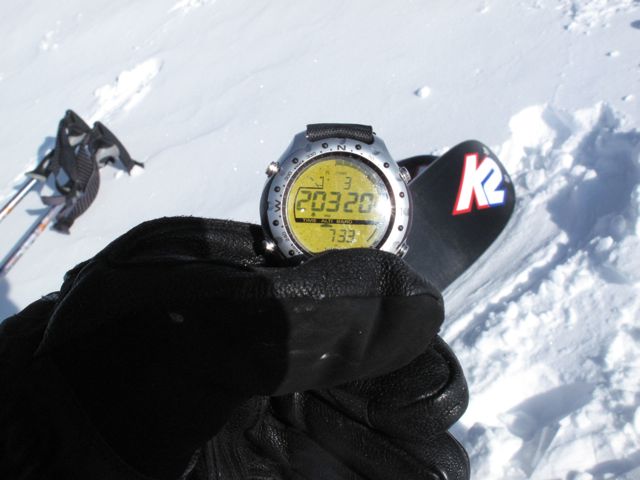 The summer of 2009 is full of successful summits for the Ice Axe team. On June 25, 2009 Glen and John successfully summited Denali and celebrated with a fantastic ski descent down. Read more about their journey below.

Story and Photos by John Morrison

When April hit this year I felt winter had really just started.  Hanging up the skis didn’t feel right, as I’d not yet racked up my fare share of turns for the season.  By the side of a campfire at the foot of an Eastern Sierra Giant, Glen Poulsen and I hatched a plan to keep winter rolling right through June.  We would attempt a ski descent of North America’s highest peak, Denali.

Of course, an attempt on a mountain the size of Denali (20,320 feet) required a good deal of preparation including a number of climbs of other mountains to maintain our fitness from a winter of laps on Jakes, Tallac, and other Tahoe peaks.  We racked up numerous descents from 13ers and 14ers in the Eastern Sierra, visited Wyoming’s Teton Range for a ski of the Grand Teton, and went for a mini volcano tour skiing on Lassen, Shasta, and Rainier.

Planning the trip and assembling our list of gear was an easy task thanks to the help and advice of good friends Kip Garre, Doug Stoup, and Bela Vadasz.  Between Kip’s recommendation to bring 5 or 6 pounds of bacon and a minimum of 2 gallons of whiskey and Bela’s idea of light and fast with no frills, we settled closer to Doug’s advised, ‘light but comfortable’.

In the early afternoon of June 19, we flew onto the Kahiltna Glacier with lots of down, plenty of salami & cheese, and the nervous wonder of what we would encounter high in the Alaska Range.  We checked out with the Park Service and skied off for a two week adventure.   Our goal was to haul our gear and food to a well established camp at 14,200 feet on the mountain’s west side.  ’14’ would serve as our ‘advanced base camp’ from which we would make our summit attempt.  Heavy snowfall and driving wind seemed to be the theme in the early days of our climb.  For 2 ½ days we skinned with heavy packs and sleds, knowing life would get better once we reached 14.  We arrived tired and hungry and hurried to set up the tent for a bit of well earned rest.  The sun poked through the clouds for brief moment affording us one last look at the mountain above before another 3 days of snow would fall.

For the next few days, we acclimatized to the thin air at 14,000 ft. by skinning and skiing laps on a 1500 foot slope above camp.  A group of girls from Telluride, that had already been on the mountain for two weeks, showed us the way through the near whiteout conditions.  Though the heavy snowfall impeded vision, it left a velvety powder surface to glide across run after run.  With each run, I felt stronger and more acclimatized, and began to look forward to the storm breaking so we could move higher on the mountain.  Our plan, if the weather ever cleared was to climb to 17000 ft. for a longer ski run and one final day of acclimatization before attempting to summit.

I awoke the morning of the 25th to what sounded like fellow climbers moving around in a bit of a frenzy.  Poking my head out of the tent, I quickly realized why.  The sky was as deep a shade of blue as I’d ever seen, the wind was light to non-existent, and the temperature, though cold, seemed reasonable for 14000 feet in Alaska.  My heart rate quickened as I started up the stove to begin the process of melting snow for coffee and oatmeal.  I climbed back in the tent to discuss our plan for the day.  “Glen, It looks pretty nice out there.  We might think about upping the ante.”

Fortunately, the days are long in Alaska in June and we were in no rush.  After a good breakfast we decided to load our packs with Gu, snickers, and down to see ‘how high’ we could acclimatize to.  Leaving camp at 11:15a in T-shirts we began to ascend the ‘Headwall’ section of the Washburn Route.  Our intended climbing route, the Orient Express, was blanketed with nearly 5 feet of new snow, and the avalanche hazard was off the charts.  Our choice to climb the Washburn seemed wise as climbing was relatively easy on the wind swept ridge to 17,200 feet.  Temps cooled as we moved higher on the mountain, but winds remained light.  We both felt good at 17 and were making very good time so we chose to continue higher.

Moving through 18,000 to 19,000 feet, I felt remarkably good and began to catch groups of climbers that had slept at 17 and begun their morning there.  Glen continued moving well, and it seemed the summit was within reach.  At 19,000 feet we took a break and fired back a bit of water and Gu.  “Only 1,300 feet to go,” I said to Glen. “That’s only a half-lap on Jakes.”  For some reason, that half-lap seemed a bit harder on Denali, but before we knew it, there was no more mountain to climb.  I was ecstatic and ran over to the USGS summit marker to kiss the continent’s highest point, quickly pulling away as my lips nearly froze to the marker.

Though well below 0, the sun’s rays, down coats, and adrenaline kept us warm on the summit as we snapped photos, ate, and readied for our ski descent.  It was only when I removed a glove to reach into my pack that I realized how cold it really was.  After nearly 30 minutes on the summit, I clicked into my Dynafit bindings and pushed off, with more than 6000 feet of vertical to ski.  I thought of the hundreds, if not thousands, of turns that lay between us, and our tent, as I arched medium sized turns down firm, but edge-able and smooth snow at 20,000 feet.  Descending was easier than anticipated as we linked together the best sections of snow between 20 and 17. 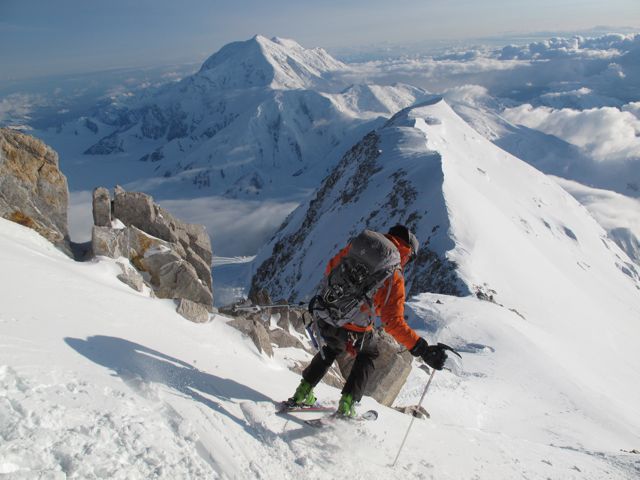 Soon, we were back at 17 camp.  As we moved through the small group of tents towards our intended descent route to 14, a National Park Service ranger hurried over to inform us of an accident lower on the mountain involving a skier and an avalanche.  It seemed our choice to stick to the more wind swept and packed snow was a good one.  He asked that we avoid the slopes directly below 17 and descend via the ridge.  We happily obliged, and descended the ridge in the fantastic golden light of a beautiful Alaskan evening.

At the top of the headwall, we discussed down climbing past the area of dodgy snow, but chose to keep the skis on, sticking as close as possible to the fixed lines.  Glen kicked off a small slide that rushed over my skis and threatened to pull me down the hill, but my edges held well.  Soon the snow conditions improved and we carved easy turns through silky powder down to 14 camp and our waiting sleeping bags.  After a quick dinner of soup and chicken dumplings, my head hit the pillow hard.

We spent the following day resting, socializing, and hanging out around 14 camp. We discussed our options as we were well acclimatized and psyched to stick around and ski.  Should the weather continue to hold the Thunderbird Couloir, the Messner Couloir, and the Orient Express all lay within striking distance of our camp.  Knowing these descents were only possible only in the right conditions, we went to sleep wondering what the coming days would bring in terms of weather and avalanche hazard.

The next morning was extremely cold and windy, with a large lenticular cloud on the upper mountain.  Our goal to tackle the North Peak and Thunderbird would have to wait.  We altered our plan accordingly and ventured toward the lower reaches of the Orient Express to assess snow stability.  A pit dug at 16,300 showed increased bonding in the snow pack and though we were nervous to move higher, we felt as though the avalanche hazard was decreasing for the less wind swept, deeper snow covered slopes.  We tucked up under the rocks of the West Rib and pulled our skins to descend.  I chose to move just a bit higher to get a look up the Orient and began to kick steps into a harder wind slab.  Not happy with the conditions, I moved to turn around and crack, the wind slab gave way pulling Glen and I down the slope in an avalanche.  We both fought, successfully, to stay on the snow’s surface, but lost a bit of gear.  Humbly, we returned to 14 camp and decided the mountain had showed us a good time, but that it was time to leave.  With the new blanket of snow hiding giant swaths of blue ice that had been visible only days before, it seemed the avalanche hazard would continue to linger.  The additional descents were just out of reach.  Denali had given us a good slap in the face and reminded us never to take the high peaks and extreme conditions of the Alaska Range lightly.

Grateful to have attained our primary goal of climbing and skiing from the summit of ‘the great one’, we packed our sleds and departed our comfortable enclosure in the village at 14 the following day.  Skiing out was incredible as we were once more treated to blue skies and a perfect weather day.  The views of the surrounding peaks and of Denali itself, which we had missed during our stormy ascent of the lower mountain, were now visible.  We snapped countless more photos and were back at the air strip by 1pm.

Just 10 days after our departure from the lower 48, we sat aboard one of Talkeetna Air Taxi’s Dehavilland Beavers on our way back to ‘civilization’.  That evening we clinked beer mugs together at the Fairview, a watering hole made famous by pioneering miners, sourdoughs, mountaineers, and bush pilots.   Ours was a joyous celebration of our successful journey.

— Thanks goes to Helly Hansen for providing the gear that kept me warm all the way to 20,000 feet, to Doug Stoup from Ice Axe Expeditions for lending us a tent and a bit of down, and to my wife for encouraging me to chase my dreams. 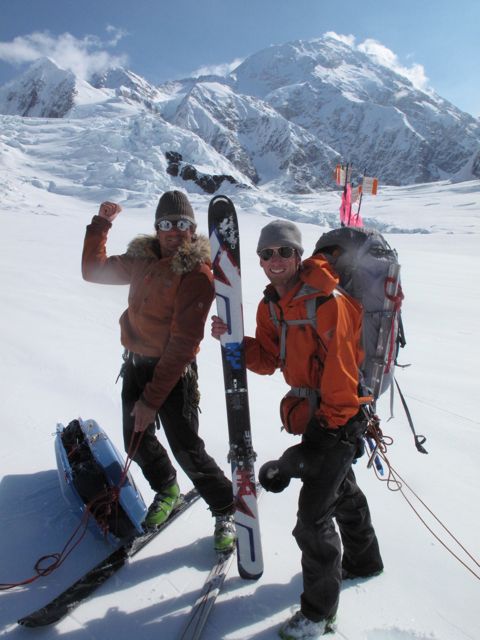