The World is Your Classroom

Doug is a polar adventurer and educator dedicated to sharing the profound beauty and fragility of our planet. For over a decade, Doug Stoup has traveled, climbed, skied and snowboarded at some of the most remote regions on the planet. He climbed three of the seven summits (Denali, Kilimanjaro and Vinson Massif). He was part of the First Ski and Snowboard Descent of Vinson Massif (the highest peak in Antarctica). He also became the first American male to ski to the South Pole.

Doug’s journeys have included South Georgia Island for the filming of Warren Miller’s feature film, STORM, Anvers Island (off the coast of Antarctica), Ama Dablam and Cho Oyu in the Himalayas, and the ever-popular Ice Bike Expedition on the glacial ice around Patriot Hills, Antarctica, Pole Track—an international North Pole expedition supporting climate change research, the island of Spitsbergen in the Arctic ocean for the filming of Warren Miller’s feature films WINTERVENTION and FLOW STATE, and educational and paddleboard expeditions on the Rio Negro in the Brazilian Amazon.

On January 18, 2008, Stoup made polar history by completing a 47-day expedition from the Weddell Sea (Filtchner Ice Shelf) to the South Pole, a distance of 738 miles. The team of two set out and successfully completed Ernest Shackleton’s failed 1914-1916 Imperial Trans-Antarctic crossing.

In January 2012, Doug was the guide for the South Pole Push Expedition, and lead athlete Grant Korgan 75 miles to become the first paraplegic athlete to trek to the South Pole. The expedition took nearly two weeks in –35 degree temperatures. The team arrived on January 17th, the 100-year anniversary of the Pole’s first explorer, Captain Robert F. Scott.

When not on the ice, Doug speaks to students around the country, and encourages them to interact in his adventures through the ICEAXE.TV website. He shares his experiences and desire to succeed with young people. He also guides and lectures business leaders on motivational and team-building skills. Doug believes that, “it’s through the struggles and failures in life that we find personal success and happiness.”

Doug has received major media coverage throughout his career and his video footage has appeared on numerous television programs and films. He is one of the pioneers of sending audio and video via satellite phone over the internet from remote expeditions around the world.

Doug has planned dozens of student presentations and lectures throughout the U.S. for 2013, and also plans to participate in guiding underprivileged children to Antarctica and to offer an ICE AXE KIDS educational scholarship.

When Doug returns to the Arctic this spring, he’ll be taking with him a customized ICE AXE package of tech gear that will enable him to link up with participating Youth Program classrooms throughout the U.S. Not only will students be able to receive daily dispatches, photos and video; but they’ll also be able to interact and ask Doug questions live.

The ICE AXE KIDS website will be updated daily with a location map based on GPS coordinates, weather patterns based on satellite observations, along with other pertinent information on the geography, wildlife and details of the expedition.

How it Works with Schools 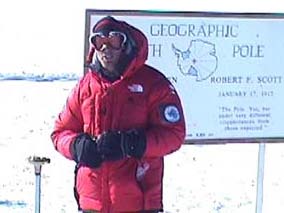